How your exhaust system works

Once in the exhaust manifold, the motion of the gases is dependent on the pressure in the engine. If the pressure is low, the gases only have one way to travel; they are passed through the turbo, then out of the exhaust pipe, catalytic converter and silencer, and into the atmosphere.

The turbo is used to power the air intake: when the exhaust gases leave the cylinder they have high energy, and are passed through the turbo, in which they turn a rotary fan. This fan turns a second fan in a separate pipe, which is part of the air intake. This builds the pressure in the air intake, and speeds up the flow of fresh air to the engine.

This helps the engine to run smoother, and, by transferring energy away from the exhaust gases, also helps to reduce the noise of the car.

The catalytic converter is used to prevent some of the more poisonous or pollutant gases produced in the engine from being released into the atmosphere. It works using a chemical process called catalysis, where, in the presence of certain metals, these gases react to form other, less poisonous substances. In an exhaust, these metals are often palladium or cadmium. 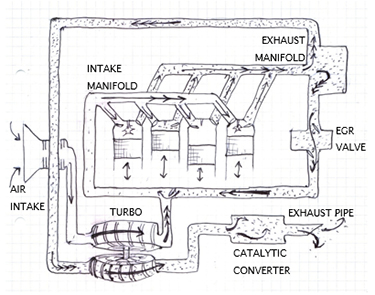