The engine is powered by four pistons that move up and down, causing the crankshaft to turn. This up-and-down motion is caused by the burning of fuel, which causes small explosions in each of the four cylinders.

When one piston moves down, the attachment to the crankshaft causes one other piston to move down with it, and the other two to move up. There are 4 stages – or ‘strokes’ in a normal petrol engine, and at any given time, each piston is completing one of the four. 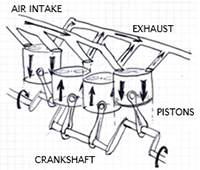