Resolutions for Valve and Camshaft issues

About you valve and camshaft system

Resolutions for Valve and Camshaft issues

The valves control the flow of air and exhaust gases in and out of the cylinders. The valves are controlled by the camshaft, which is turned by the timing belt.

A cam is an asymmetrical cog that turns the rotational motion of the shaft into an up-and-down motion in the valves. A spring pushes the top of the valve against the edge of the cam, so when the cam is at its thinnest the valve is up, and when it’s at its thickest the valve is pushed down, allowing air to flow.

At the top of the valve is a rocker; this is used to ensure the smooth motion of the cam and valve. It rests on two small hydraulic pistons, which absorb vibrations from the valves. 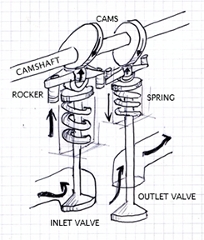