About your Car Alternator...

The car’s alternator uses the motion of the engine to charge the battery and power the car’s electronic components. Rotational motion is transferred from the crankshaft to the alternator by the drive belt, which also powers to the power steering system, the air conditioning pump and coolant fans.

The drive belt sits on top of the timing belt, and is powered by the same section of crankshaft, though it attaches further up.

In the alternator, this belt turns the rotor shaft, which sits in the centre of the alternator. A set of magnets sits on this shaft, and spinning the rotor causes the magnetic field to change.

Surrounding this shaft are circular coils of wire that make up the stator coil. When the rotor spins, the magnetic field cuts the wire, and it causes current to flow back and forth in the stator.

There are wires that then transfer the current from the alternator to charge the battery. A voltage regulator is used to ensure that the right voltage is transferred to the battery, as too much or too little can cause damage to it.

Because of its essential role in the car’s electrical system, it is vital that the alternator is in full working order. If the alternator fails the battery will quickly drain of charge, causing the car to lose power and eventually stop.

One of the most common problems with the alternator is bearing failure: if the bearings that allow the rotor to spin freely seize up or become worn down it will eventually wreck the alternator. This problem is often characterized by a loud grinding noise.

There can also be problems with the drive belt if it becomes loose or worn – this is usually quite cheap and easy to replace provided other components have not been damaged.

If you think there are problems with your alternator then call Headlands – leaving a faulty alternator can so real damage to your battery, and work out far more expensive in the long term! 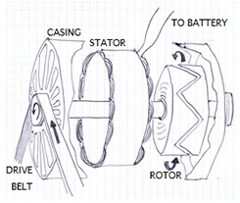 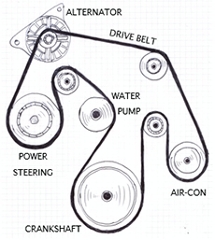