About your Starter Motor...

When a car is switched on, the key momentarily completes a circuit between the battery and the starter motor, allowing the starter motor to turn. At the same time it also lets off a spark, which ignites the fuel in the engine.

The flywheel turns with the crankshaft – this runs through the engine, and out the other side, to a gear attached to the timing belt. This turns the other parts of the engine, and, ignited by the spark from the ignition, the engine starts to run.

Often, problems with the ignition are caused by issues with the wiring of the starter motor, as if this doesn’t start the flywheel turning, the spark to the engine is insufficient to turn the crankshaft itself, and the car will not start. 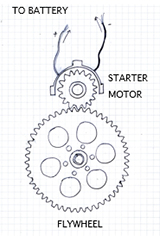